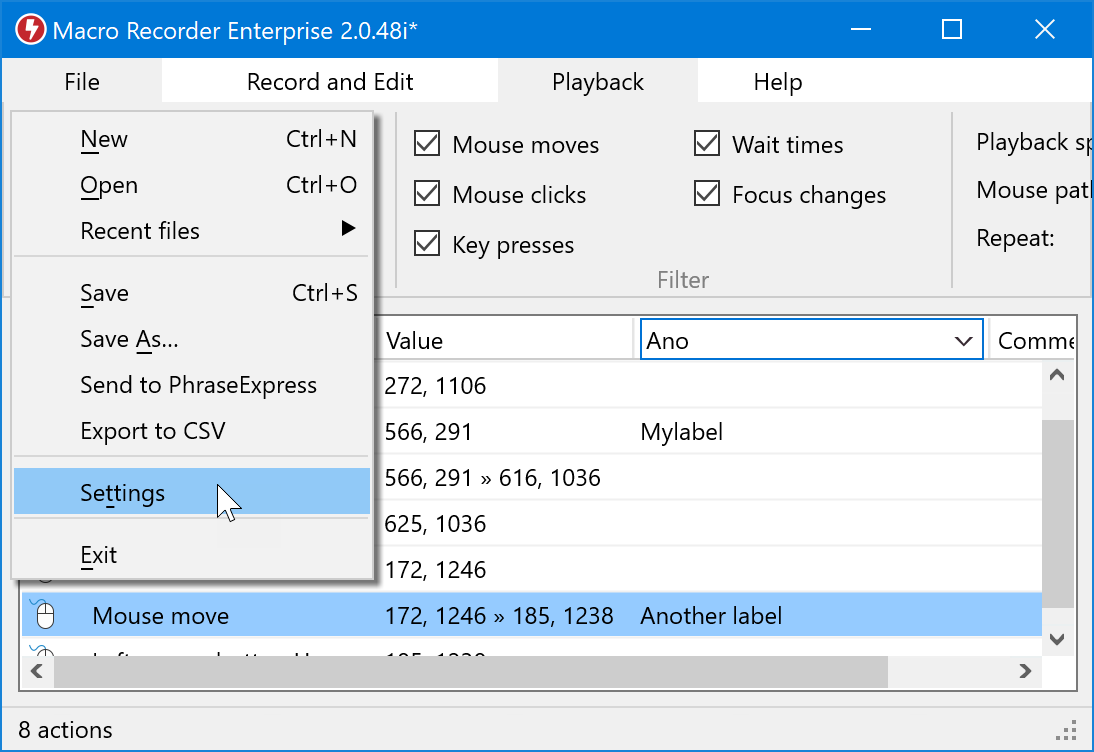 Macro Recorder records mouse clicks including the mouse path in between those clicks. If you don't need the movements for your automation tasks, you can disable tracking the actual path to minimize the macro file size.

Unless, you have a strong need to minimize the macro recording file, we recommend not to disable mouse path recording as you can filter mouse paths on demand.

Macro Recorder captures each X/Y mouse coordinate if the mouse is moved the minimum distance as defined by parameter "Minimum mouse movement".

Decreasing this value increases the number of captured mouse positions, thus increasing the mouse movement accuracy. However, as even tiny mouse movements are sampled, this results in a larger macro file size.

yHigher values values reduce the number of sampled mouse positions, thus decreases the precision for a smaller file size. If your macro includes mouse hover related tasks, make sure, that the mouse movement accuracy is set properly to hit the hover sensitive positions.

"Mouse sensitivity" determines the time rate for scanning the current mouse position. The higher the sampling rate, the higher the accuracy of the mouse recording.

Decrease this value only if the mouse recording requires too much CPU power on your computer.

Example: If you press the hotkey CTRL + ALT + S , the operating system is continuously firing key down events for the modifier keys until you release the keys. However, in most cases, only one key down event would be sufficient.

A few games may take advantage of the repetetitive key down events, so you can opt to not filter those events.

Parameter "Minimum wait time" defines the minimum time threshold, before to a new action item is added during a recording.

Example: If you move the mouse, make a pause and then continue to move the mouse, the parameter determines that the pause causes the action to break into two separate mouse movements. 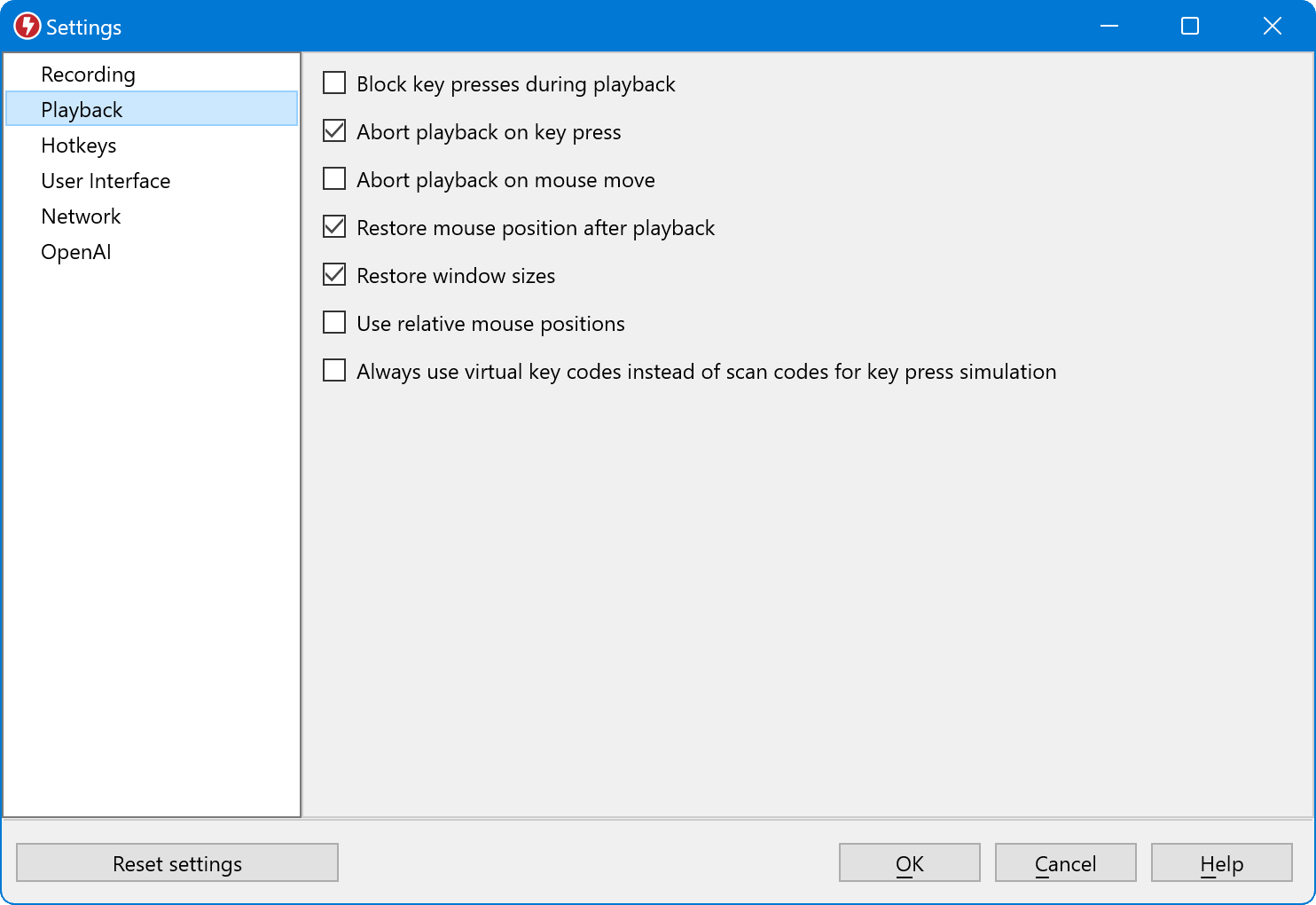 In the playback settings, you can configure whether the Macro Recorder stops the playback of an automation when you move your mouse or press a key.

You can also control whether keystrokes are forwarded to the current remote application during automation playback.

A macro recording contains information about the window size and position of recorded applications. You can configure Macro Recorder to restore the program window before launching the macro playback.

In case of problems with the mouse, for example in games, you may experiment with use of relative mouse coordinates.

Don't underestimate the power of hotkeys in Macro Recorder! 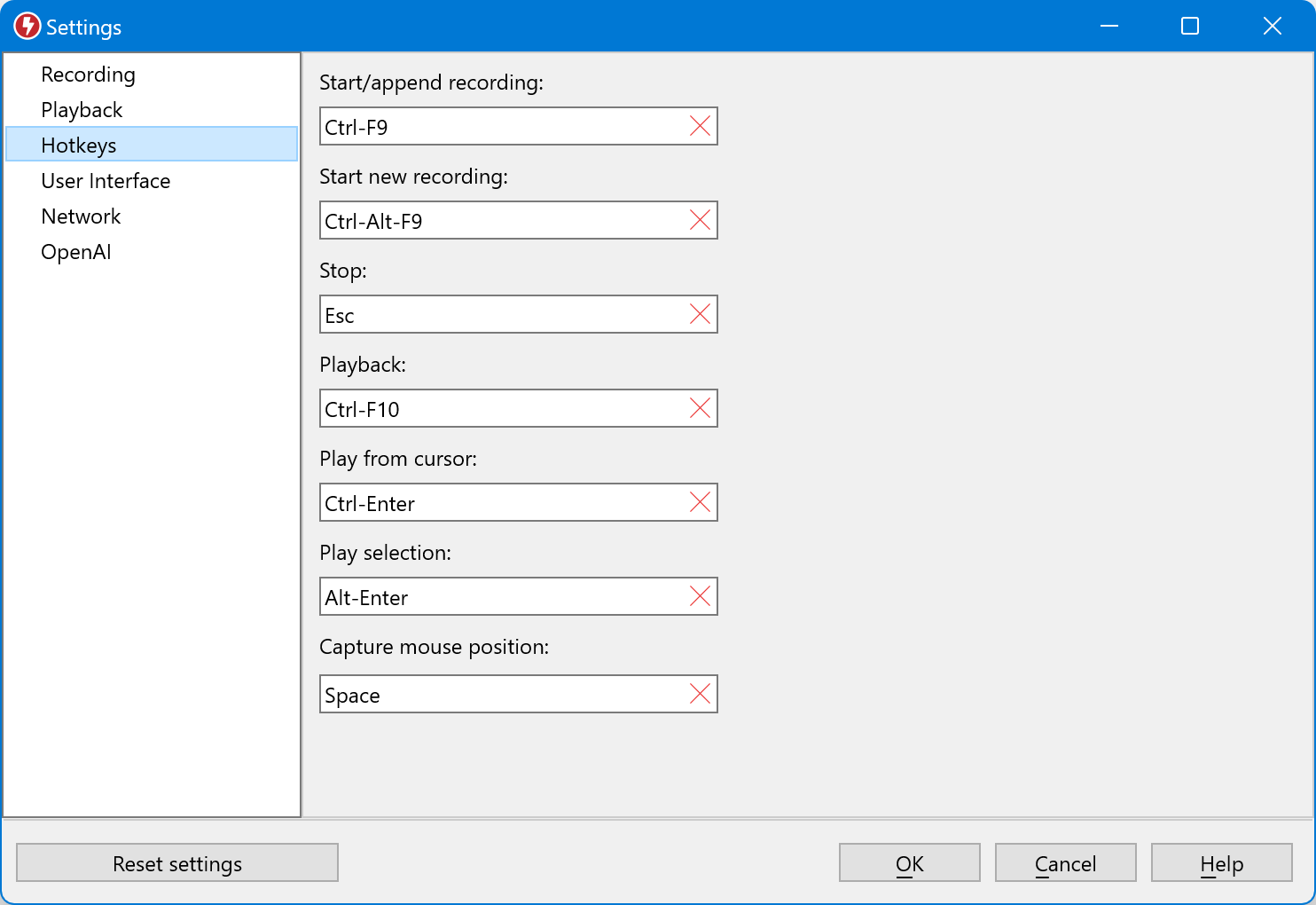 Hotkeys allow you to record/start/stop macros with a single press of a key and while the Macro Recorder program window can stay minimized which prevents it getting in the way.

You must use a key together with a combination of the SHIFT, ALT and/or CTRL key, e.g. CTRL+ALT+F9.

The default capture hotkey is the space bar.

Playback can always be stopped by pressing ESC, regardless if you configure an additional custom hotkey.

For most macro recording and playback tasks, you actually don't need access to the main program window and can configure it to launch minimized to the task/menu bar.

We recommend to configure hotkeys to control Macro Recorder with a few keyboard shortcuts.

You can also configure the user interface language.